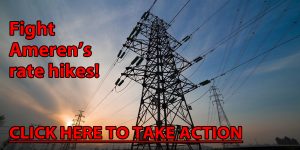 There have been major developments concerning your Ameren natural gas and electric bills. Here’s a summary:

Earlier this year, Ameren filed for a $46.6 million gas rate hike before the Illinois Commerce Commission (ICC). Now, it also wants a $71.75 million electric hike. The increases would take effect in January 2019.

The company argues that the rate cuts nullify the impact of the increases. We’re thankful for those cuts, but the real question is: Does Ameren deserve these increases? Sign our petition and help us fight every penny the company can’t justify.

Your ticket for the: Good news/bad news on Ameren bills