When Delores met James, a salesman from Illinois Gas & Electric, she says she was a bit confused by his offer, but he insisted it was a good deal. She wanted to take notes, but James never gave her pen back after borrowing it to write on her bill.

And what he wrote on the bill raised eyebrows in the halls of CUB. 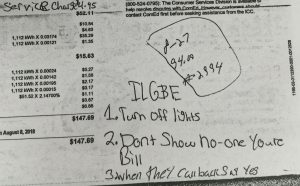 Actual copy of Delores’s bill, with James’s notes on what to say to finalize the transaction.: “Say yes.”

It happened just before the “Third Party Verification,” or TPV. Under Illinois law, that’s when a third party–an independent company that contracts with the supplier–calls the customer to verify that he or she wants to actually sign up for the new electricity plan.

TPV is supposed to be a consumer protection–and the sales rep is not supposed to be present during that call. But Delores said James stayed anyway, and even placed the phone on speaker so he could listen. On top of that, he scribbled these notes on Delores’ bill:

The last note refers to the third party’s final question: Is the customer aware he or she is enrolling with an alternative supplier? James instructed Delores: “Say yes.”

She did say yes, but Delores added that she and her husband soon had a funny feeling about the offer. James had left his phone number with them, so they called him to stop the enrollment. They couldn’t reach him. They also sent letters to their utilities–ComEd and Nicor–to let them know they did not want to switch over. 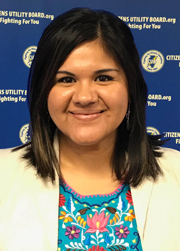 Concerned she couldn’t get a response, Delores attended a CUB utility-bill clinic in Crest Hill, and met with Environmental Outreach Coordinator Ivonne Oritz. At CUB’s popular clinics, it’s not unusual for CUB staffers to dial up a supplier to advocate for a consumer on the spot, and that’s what Ivonne did, using the number James provided.

James answered and acknowledged previously speaking with Delores. Ivonne then told James she worked for CUB, and asked for his ID number.

Ivonne didn’t stop there; she contacted Illinois Gas & Electric to cancel Delores’s enrollment. She also informed the company of James’ “unethical practices,” and requested that Delores’ name be removed from the contact list for any future solicitation.

Beware of high-pressure door-to-door sales tactics. If you’re considering enrolling with an alternative supplier, first compare the offer with your utility’s rate. CUB has a comprehensive list of supplier offers, updated weekly, for both ComEd and Ameren customers. Check out our similar guides for Nicor and Peoples/North Shore Gas customers.