We asked, you answered: your top money-saving utility tips

Some of our best sources of information are Illinois consumers who tell us what they’re doing to save money. Last week, we asked you to submit your money-saving utility tips. You shared a lot of good advice, everything from assessing your phone plan to switching to LEDs. Below, we’ve highlighted some of our favorite submissions. 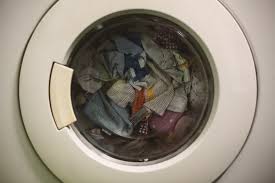 Washing your clothes in cold water can save you $40 a year.

“Use cold water for washing clothes,” wrote Roberta from Danville. Contrary to common belief, cold water will clean your clothes just as well as hot water, and it can reduce your energy costs and your environmental footprint. Washing machines burn about 90 percent of their  energy on heating the water, according to Energy Star, the government program that promotes energy efficiency. So washing in cold can cut your energy costs. In fact, the Environmental Protection Agency (EPA) reports that this simple act can save the average household as much as $40 a year.

Roberta also recommended installing weatherstripping. Adding weatherstripping around leaky windows and doors, especially in older, more drafty homes, can save you up to 20 percent on your heating and cooling bills, according to the U.S. Department of Energy. Most weatherstripping is easy to install, and there are options for nearly every budget. (For example, the Illinois Home Weatherization Assistance Program helps low-income residents and households conserve fuel and reduce energy costs by making their homes and apartments more energy efficient.) 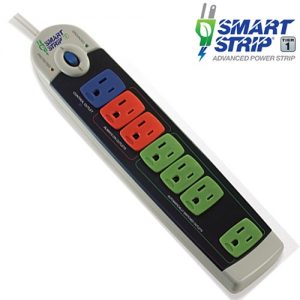 An example of a smart powerstrip

Elena from Chicago unplugs her unnecessary appliances, such as her toaster and phone chargers. “Plug them in only as needed!” she wrote. Your appliances may have digital clocks and displays that use energy when they are turned off but still plugged in. Also called vampire power, phantom load is the extra energy sucked up by these turned-off appliances. Although individually a plugged-in lamp or toaster may not make a huge difference to your electricity bill, the Energy Department estimates that phantom load makes up about 10 percent of your electricity bill.

Unplugging energy suckers such as TVs, gaming consoles, sound systems, computers and printers may seem inconvenient–and that’s where a smart powerstrip comes in. You can plug multiple devices into such a device. For example, you can plug your computer into a “control” outlet. When you shut down for the night, it will turn off power to devices (like a printer and scanner) plugged into “switched” outlets. Other devices that must stay on always, such as a modem, can be plugged into “constant hot” outlets.

Roy from Northbrook says he saved money by switching to LED bulbs. LEDs are the most sustainable light bulb on the market right now. Traditional bulbs expel 90 percent of the energy they use as heat, according to the Department of Energy. That can be a fire hazard, and a big money waster.

Most LED bulbs have a lifespan of 20,000 to 50,000 hours, compared to 1,200 for an incandescent. Not only do they last much longer than their competitors, but LEDs are also 80 percent more efficient than other bulbs. The Washington Post reported that a typical home switching from incandescent to LED bulbs could save $600 a year. Buying longer-lasting, more efficient LED bulbs can really pay off. (And thanks to efficiency legislation CUB has supported over the years, there are great discounts on these bulbs. See our Clean Energy page.) 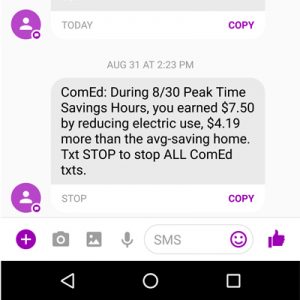 Participants in Peak Time Savings (ComEd) and Peak Time Rewards (Ameren) are periodically notified of “peak time events.” The utilities will notify  you of the credits you earn by cutting electricity usage during these peak hours.

Instead of paying a flat rate per kilowatt-hour of electricity, like most customers, Hourly Pricing and Power Smart Pricing participants pay a rate that varies from hour-to-hour based on wholesale market prices. By using most of their electricity during low-demand periods, such as late at night or early in the morning, they can potentially save. ComEd estimates Hourly Pricing participants save about 15 percent on the electricity supply portion of their bill.

We recommend Peak Time Savings and Peak Time Rewards for everyone. Participants in this no-cost program are periodically notified by ComEd and Ameren of “peak time events”–typically a few hours on a handful of hot summer afternoons when electricity demand is high. During these hours, the utility will credit a customer’s monthly bill based on how much they reduced their energy use during the peak hours, compared to past usage. Since ComEd launched its program in 2015, customers earned more than $10.2 million in bill credits. If you can’t reduce your energy usage during a peak-time event, you won’t be penalized. You just won’t get a credit.

James from Oak Forest recommends assessing your phone plan. He was paying an average of $53 per month for his landline service. After doing some research and switching to a lower-cost plan, called Illinois Complete Choice Basic, he saved about $15 per month.

Many times, consumers are paying for plans and features they don’t need. By assessing your landline and cellphone plans, you can usually cut your phone costs. Soon, CUB is releasing a cellphone guide that can help you decide what phone plan is right for you.

Your ticket for the: We asked, you answered: your top money-saving utility tips

We asked, you answered: your top money-saving utility tips