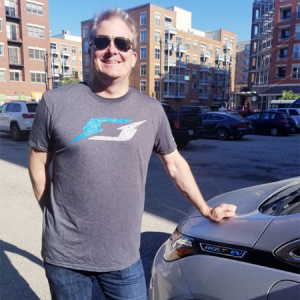 CUB Executive Director David Kolata is an EV driver himself, and he’s saved about 50 percent on his charging costs, thanks to dynamic pricing.

A new study by CUB found that electric vehicle drivers in Central and Southern Illinois could potentially save hundreds of dollars a year in charging costs if they participate in an Ameren Illinois program called Power Smart Pricing.

“Charge for Less: An Analysis of Electricity Pricing for Electric Vehicles in Ameren Territory” was released on Monday. It was written by CUB Data Scientist Ramandeep Makhija, Research Director Jeff Zethmayr and Executive Director David Kolata.

The study found that Ameren’s Power Smart Pricing program, a special electricity plan available to residential customers, could have helped electric vehicle (EV) drivers reduce the annual cost for charging their vehicles by 50 percent to 51 percent, compared with what they would have paid under Ameren’s traditional electric prices. The potential savings ranged from $31 to $220 over the year studied, 2018.

Unlike Ameren’s standard power price, which changes infrequently, Power Smart Pricing charges a market-based price that can change hourly. Those prices often plummet during “off-peak” times (typically nights and weekends) when electricity demand is low, giving customers the chance to save money on their electric bills.

By encouraging drivers to charge their cars when electricity demand is low, Power Smart Pricing not only saves participants money, but it also puts less stress on the power grid, improving reliability and reducing pollution.

“Power Smart Pricing is a great choice for a lot of Ameren customers—because the program is good for the planet and our pocketbooks—but it is especially beneficial for EV drivers,” said CUB Executive Director David Kolata, an EV driver himself. “Illinois urgently needs to develop smart charging policies that promote programs like Power Smart Pricing to prevent our costs from going up as more and more EVs hit Illinois roadways.”

The Edison Electric Institute predicts that EV sales will rise sharply over the next decade, leading to nearly 19 million in the U.S. by 2030, up from about 1.5 million now. If not properly managed, this influx could significantly increase overall U.S. peak electricity demand and force everyone to pay higher power bills to cover a costly expansion of power plants and the grid. But this is preventable with good policies. In fact, CUB studies show that optimization—charging EVs at the right times—would lower electricity rates for all consumers.

CUB’s report comes as EVs are generating news in Central and Southern Illinois. In Normal, Rivian is giving new life to a shuttered Mitsubishi factory, transforming it into an EV manufacturing plant that will employ as many as 1,000 workers. Meanwhile, in Springfield, Gov. J.B. Pritzker has called for clean energy legislation that “accelerates electrification of our transportation sector.”

CUB is currently advocating for the General Assembly to pass the Clean Energy Jobs Act (CEJA), the most consumer-friendly energy bill in Springfield. It includes a “beneficial electrification” provision that would encourage people to charge their EVs at off-peak times, using programs like Power Smart Pricing.

Power Smart Pricing is open to all Ameren customers, not just those with EVs. Participants save money by adjusting the time of day when they perform major tasks like operating the dishwasher, doing laundry, or charging  an EV. In fact, Power Smart Pricing customers have saved an average of about 15 percent on the supply portion of their power bills.

Kolata is a customer of Hourly Pricing, a ComEd program similar to Power Smart Pricing, but for Northern Illinois consumers. He said a similar CUB study for ComEd territory found potential savings of at least 52 percent on energy costs, which is in line with how much he has saved.

“Electricity customers are hungry for good choices in the market, and Power Smart Pricing is one of the best, whether you drive an EV or not,” Kolata said. “We hope lawmakers in Springfield pass the Clean Energy Jobs Act to make sure the grid is prepared for the rise of EVs but also to connect EV drivers to good programs like Power Smart Pricing.”

Ameren customers interested in exploring whether they are a good fit for Power Smart Pricing should visit PowerSmartPricing.com or call 1-877-655-6028.