UN report: Climate disasters are likely to get worse–we must act now 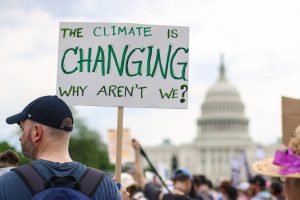 With increasingly cold winters and hotter summers, Illinois consumers face the prospect of higher and higher gas and electric bills. It’s likely to get worse, according to the latest climate report by the United Nations, but we still have time to act.

The United Nations Intergovernmental Panel on Climate Change (IPCC) has released its latest 2022 Climate Report showing we will face increasing climate hazards as soon as 2050, but the worst of it can be prevented or lessened if we take meaningful action now.

The report details how the planet is facing the increasingly severe impacts from climate change, continuing the trend we’ve seen over the past few decades. Where the 2021 report was dubbed a “code red for humanity,” this year’s report is “an atlas of human suffering and a damning indictment of failed climate leadership,” said UN Secretary General António Guterres. Scientists are dubbing this report the “your house is on fire” report to signal just how necessary it is to take action to prevent these outcomes.

For the United States, climate change over the next few decades includes rising air, water, ocean, and ground temperature by as much as 1.5 degrees celsius. These increasing temperatures will also require more use of our limited water supplies, test the capacity of our infrastructure systems, and impact our country’s food and nutrition security. The consequences aren’t only hotter temperatures and natural disasters, but also huge adjustments to our everyday lives. Here’s three key facts you need to know:

Increasing global temperatures will continue to disrupt the supply-chain and slow down international trade–meaning the delays we’ve seen over the last few years in shipping and grocery store shortages could continue to get worse. These issues hit the most vulnerable people and environments the hardest.

“It’s really bad and there’s a good chance that it will get worse,”  said Robert Habeck, the German vice chancellor and minister for climate and economy, reacting to the report. “But if we do everything we can, that will make a difference. Our actions will make the difference… That’s what hope is.”

So don’t be paralyzed by the problem: Act now. If you can’t do something big, do something. Everyday actions can make a huge impact in how much we are affected by climate change over the next few decades. Here are a few ways you can take action and get involved:

Your ticket for the: UN report: Climate disasters are likely to get worse–we must act now

UN report: Climate disasters are likely to get worse–we must act now