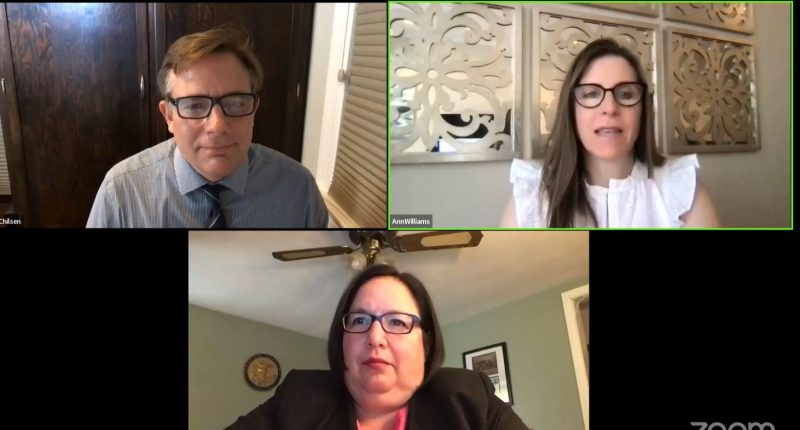 Illinois legislative leaders and CUB are urging the power grid operator in Central and Southern Illinois to fast track renewable energy projects that could reliably power 4.5 million homes and help relieve energy problems in the region.

At a news conference July 21, legislative leaders criticized the Midcontinent Independent System Operator (MISO), the multi-state entity that manages the generation and transmission of electricity across Central and Southern Illinois. The region is suffering through a price spike currently, connected to global issues and a huge jump in the price for reserve power (also called capacity costs) that MISO blamed on an increase in electricity use and a dip in power supply. (See the TV coverage of the news conference, and watch it yourself.)

But there currently are 34 solar and wind projects capable of generating more than 6,000 megawatts of energy awaiting approval in MISO’s queue. That’s enough to power 4.5 million Illinois homes. MISO’s foot-dragging could keep these projects languishing for years, the leaders said.

MISO has been slow to act, and has instead raised the possibility of controlled power outages if there’s not enough electricity available. Ameren Illinois, the electric utility, has responded that it’s optimistic it will be able to keep the lights on this summer. Still, fossil fuel interests and their allies have used MISO’s comments as an opening to wrongly blame these problems on the Climate and Equitable Jobs Act (CEJA) and push for re-opening the nation-leading clean energy bill.

“The answer to capacity and price issues is not to reopen CEJA, but rather to move quickly to implement it and get existing renewable projects online faster. That starts with MISO ensuring we get those 34 projects capable of generating 6,000 megawatts of renewable energy on the grid. If Ameren customers ever find themselves in the dark, MISO’s inaction is to blame. They are asleep at the switch,” said State Senator Cristina Castro, the chief Senate sponsor of CEJA.

“Rather than quickly bringing new energy resources on to the grid, MISO is now trying to shift blame, warning of potential power outages this summer in Central and Southern Illinois, an apocalyptic and misleading view that even Ameren disputes. Fossil fuel interests and entrenched energy lobbyists are jumping on MISO’s blame game and calling for a return to the days when coal and gas generated most of Illinois’ electricity, even as fossil fuel prices skyrocket, emissions pollute our communities, and the planet burns,” said State Representative Ann Williams, chief House sponsor of CEJA.

“Going back to coal and gas is like pouring gasoline on a fire in terms of hiking energy prices and polluting our communities,” Williams added.

Advocates pointed out that MISO has known the transition from dirty, expensive fossil fuels to clean, less expensive renewables has been coming since at least 2007, when Illinois passed its first Renewable Portfolio Standard (RPS) that has only been accelerated by other initiatives.

“For years, MISO has known this transition was coming, through the advent of the renewable portfolio standard and multiple rounds of legislation, including the Future Energy Jobs Act in 2016 and CEJA in 2021,” said Jim Chilsen, director of communications for the Citizens Utility Board (CUB). “MISO has the tools to plan and complete this transition efficiently. I join Illinois consumers in urging MISO leadership to stop the delays and get the job done.”

In addition to strong criticism from leaders of the Illinois General Assembly, Chilsen noted Gov. JB Pritzker’s recent criticism of MISO for failing to strengthen and modernize the power grid.

On July 12, Governor Pritzker told Capitol Fax that, “MISO is a regional compact, and the challenge has nothing to do with the Climate and Equitable Jobs Act. It has everything to do with the production of energy all across the region covered by MISO.”

“Governor Pritzker is correct,” Chilsen said. “MISO needs to build transmission infrastructure to move power throughout the region and update policies to quickly and efficiently put these renewable energy projects onto the grid. Illinois consumers are relying on MISO to do its job.”

Your ticket for the: With energy prices skyrocketing, advocates urge power grid operator to stop delays on new generation