CUB explainer: What are Capacity Markets? 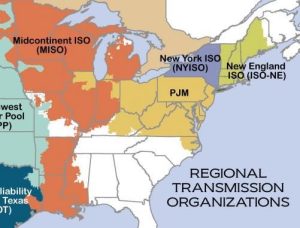 As we hold community events across the state of Illinois, people are often surprised to hear that our electric bills cover not only the power we use but the power we could use. That’s capacity.

And the cost of capacity–for most customers it’s hidden in the supply charge we pay–has grown over the years to about 21 percent of the supply side of our bills, according to the Illinois Commerce Commission.

Because it’s such a key part of your bill, CUB produced this explainer to give you more information about capacity costs and how the market sets those prices.

In the energy sector, there’s a lot of planning to ensure that every customer who pays for electricity can expect it to work when they turn on a light switch.

Your utility handles the distribution of electricity from the power lines in your neighborhood to your home. If there’s a power outage you call them.

But beyond that, the high-power transmission lines and the flow of power over that network is managed by a somewhat mysterious organization that many customers don’t even know exists: a Regional Transmission Organization, or RTO. The RTO serves as a kind of “air traffic controller,” monitoring the movement of electricity from large power plants to your electric utility’s system.

Not only do RTOs monitor reliability in these regions, but they also manage separate auctions to determine the price of energy (the electricity that is consumed by end-users) as well as the price for capacity (the maximum amount of electricity that could be consumed by end-users). The PJM capacity auction, the largest of its kind in the country, covering 65 million customers and about 20 percent of the country’s power supply, is a forward auction selling energy capacity for three years in advance.

The MISO capacity market is a prompt auction selling energy capacity over the next year. This year, it made headlines when capacity issues sparked a 120 percent increase in Ameren Illinois’ summer price, and MISO officials warned of the possibility–albeit remote–of rolling blackouts to handle a potential capacity gap during high-demand periods.

Basically, the capacity market determines how much power is needed and where it should be located in order to prevent widespread power outages when demand for electricity is high. The market uses formulas to predict a region’s peak total energy usage for the year, plus a cushion. This cushion is controversial because it is usually provided by expensive, fossil-fueled power plants. When the cushion is inflated, electric customers often end up paying too much for dirty power they don’t need. In fact, a 2020 Sierra Club study found consumers are paying $4.4 Billion in over-procurement costs to keep 77 gas and coal plants online in PJM territory.

RTOs are nonprofit entities, but they have little accountability or transparency to consumers who often don’t know they exist. That’s a big reason why CUB launched a new project, CLEAR RTO, a watchdog campaign advocating for cleaner, more reliable and more affordable electricity for the 65 million customers in PJM territory.

“If you use electricity, you care about PJM and our work,” CLEAR RTO’s website says. “Behind every light switch and power plants is the electricity grid–sort of a superhighway with tolls on it. And, how those tolls are administered decides how much you pay and how clean your energy is.” CUB also advocated for the Climate & Equitable Jobs Act (CEJA), a state law that passed in 2021 and lays the groundwork for better long-range energy and grid planning. This is necessary to help Illinois make the transition to cleaner, more affordable energy and to avoid capacity price spikes like what happened in Ameren territory this year.

If you’re interested in learning more about capacity markets, here are a handful of helpful resources:

Your ticket for the: CUB explainer: What are Capacity Markets?

CUB explainer: What are Capacity Markets?