All Barbara Hardin wanted was the $11.78 AT&T owed her. For 11 months, she called the company a dozen times to try to get her money back. She had no such luck, until CUB got involved.

When the retired homecare worker first noticed that she overpaid on her bill in August 2015, she thought it would be easy to just call AT&T and explain what happened. It wasn’t that simple. She received different responses from the various customer service representatives she talked to.

Two rattled off AT&T’s version of the old line: “The check is in the mail.” They told her the payment would be mailed in 7 to 14 days—that didn’t happen.

On top of that, a representative told her they had the wrong address—Barbara had recently moved to Des Plaines and had closed her AT&T account—but promised the company could now tackle the case. Still nothing happened. “They would go to the computer and they’d have nothing there,” Hardin said.  “I gave them my old account number but it wouldn’t work.”

Finally, Ms. Hardin, a CUB member, turned to the consumer group. After seeing how helpful CUB had been at a past utility bill clinic at the Des Plaines Library, Ms. Hardin thought the watchdog might be able to assist her. Annie Warnock—a CUB consumer counselor—was assigned to the case. 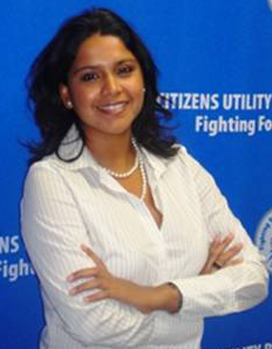 Annie contacted AT&T right away, and within two days, Ms. Hardin got a call from the company saying her case was under review. She finally got her check on June 15, about a year and dozens of calls after she first contacted the company.

“After so many frustrating months trying to get her money back, I’m glad that CUB could help Barbara get a prompt response from AT&T,” Annie said. “Barbara’s request should have been processed without all this runaround. However, situations like this happen all the time, and when they do, we are here to help.”

Kudos to Barbara for never letting AT&T off the hook as her case dragged on. Just how good did it feel to finally get that check?

“Super duper!” she said. “I’ve been a member for quite a while, and tell all my friends. Thank you very much for what CUB is doing!”