Anatomy of a Bad Deal

When Robert Smith’s gas bills suddenly shot up, he was confused. He was supposed to be paying less for gas with alternative gas supplier Energy Rewards than with the regulated utility in his area, Nicor. So he sat down to compare what he had been paying with Energy Rewards to what he would have paid with Nicor – and what he found was a huge rip-off. 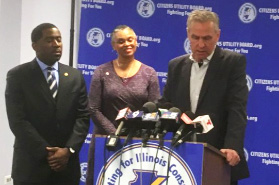 Robert Smith speaks at a news conference calling for reforms in the energy supply market.

“To me it’s price gouging, I can’t put it any other way,” Smith told CBS 2’s Pam Zekman. By the time Smith canceled with Energy Rewards, he was paying about three times the Nicor rate!

That’s a far cry from the 5 percent savings Energy Rewards had promised him when he first signed up. Over the first year of his contract, Smith saved a total of $25. Once the contract expired, however, Smith was switched to a variable rate. (Smith says he was not notified of the switch, but Energy Rewards disputes this.)

Smith’s gas costs ballooned, but he could find no explanation on his bills, not even how much he was paying per therm. So he sat down to make a spreadsheet and do some math. By January 2018, eight months after his contract renewal, his gas bill with Energy Rewards shot up to $405. Nicor would have charged him just $130.

“Gas bills are not designed to be easy to read,” said Julie Soderna, CUB’s Litigation Director. “Mr. Smith had to put in an extraordinary amount of work to figure out what he was paying and how it compared to the regulated utility. A lot of people are simply not able to do that.”

Smith was featured in Zekman’s CBS 2 investigation, and at a news conference calling for reforms in the market.

His experience is a perfect example of how a supplier can lure you in with the promise of moderate savings and then slam you with an extremely high rate. To learn how to assess offers from alternative energy suppliers, read our new Consumer Alert at CUB’s Help Center.

Your ticket for the: Anatomy of a Bad Deal

Anatomy of a Bad Deal