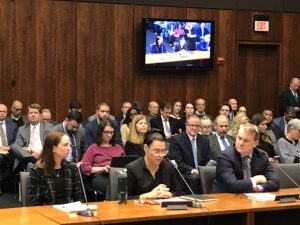 A federal regulatory ruling that threatens to raise electric bills by up to $864 million a year “punishes Illinois for our successful clean energy policies” and is a “direct attack” on the state’s authority to protect its residents, CUB Executive Director David Kolata told a legislative committee today.

The recent ruling by the Federal Energy Regulatory Commission (FERC) “poses a serious threat to our electricity bills,” Kolata testified at a House Public Utilities Committee hearing.  “But we can prevent that threat from materializing if we pass the Clean Energy Jobs Act and take the power back for planning our energy future.” (Tell Springfield to pass the Clean Energy Jobs Act.)

It was the first of several subject matter hearings on energy legislation during the General Assembly’s spring session. The FERC ruling and its threat of higher bills has ramped up the urgency to pass clean energy legislation that would protect customers from the higher rates. In his state of the state address, Gov. Pritzker called for Illinois to pass strong energy legislation: “It’s time to put consumers and climate first,” he said.

Kolata, head of Illinois’ top utility watchdog, testified that clean energy has been good for Illinois. Since the 1990s, the Land of Lincoln  has gone from the highest to the lowest average residential electric bills in the Midwest and now has the seventh lowest power bills in the country.

“Of course, more needs to be done. We need to improve affordability and protect our pocketbooks as well as the planet,” Kolata said, but the FERC decision threatens to reverse the progress that’s been made.

The ruling not only means an increase to our power bills, but it also kicks “new renewables out of the market” and guarantees a “bailout bonanza” for dirty, fossil fuels, testified Christie Hicks, a former CUB lawyer  who is now a senior attorney at Environmental Defense Fund.

“But it doesn’t have to be this way,” Hicks said. Illinois is the only state with pending legislation that would address the FERC order today. The Clean Energy Jobs Act (CEJA) is an opportunity to do what’s best for Illinois and stop supporting out-of-state energy producers, she said.

If passed, CEJA would:

“We have a clear choice here in Illinois,” Kolata said. “We can take the power back and invest in clean energy and communities, or we can be bullied and pay more for dirty power we don’t need.”

“To us, the choice is simple. We’ve come too far and accomplished too much to stop now. It’s time to pass the Clean Energy Jobs Act and put consumers and the climate first.”

Your ticket for the: Federal ruling “direct attack” on Illinois, CUB’s leader testifies