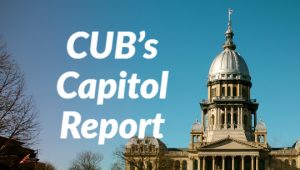 Although the Coronavirus pandemic has thrown some obstacles in the path of CUB’s spring legislative agenda, the fight for the Clean Energy Jobs Act continues—and we  scored a few consumer victories during the General Assembly’s special session.

From May 20-23, the General Assembly met for the first time in 11 weeks with the COVID-19 public health crisis at the top of its agenda. Here’s a utility-related update on legislative action.

The General Assembly did not act on this legislation, which CUB, as part of the Illinois Clean Jobs Coalition, has fought to pass for more than a year. This development ramps up the importance of passing legislation before the end of 2020, in the fall Veto Session. CUB supports CEJA because it protects consumer pocketbooks while giving the state a road map to 100 percent renewable energy. It would expand energy efficiency programs that have already saved Illinois consumers billions of dollars and implement market reforms to protect power bills from a Federal Energy Regulatory Commission (FERC) ruling that threatens ComEd customers with an increase of up to $1.7 billion over the next decade. In addition to protecting our bills, CEJA would draw tens of millions of dollars of private clean energy development and create good-paying jobs at a time when Illinois is trying to recover from the most significant financial crisis since the Great Depression. Tell the General Assembly you support CEJA.

The General Assembly also amended the Energy Assistance Act to help more low-income households pay for their gas and electric utility service. Previously, qualified applicants for the Low-Income Home Energy Assistance Program (LIHEAP) had to have an income less than 150 percent of the poverty level. The new amendment bumps the threshold for qualification to 200 percent, allowing more people to apply. (The increase in financial aid comes from federal legislation that gave Illinois $41.8 million in extra funding for the program.)

Adjustments were also made to the Percentage of Income Payment Plan (PIPP) program, increasing the eligible income level to 200 percent of the poverty level and increasing the monthly assistance amount. PIPP is available for LIHEAP eligible households that are customers of one of the following utilities: Ameren Illinois, ComEd, Nicor Gas and Peoples Gas/North Shore Gas. Under PIPP, eligible households pay a percentage of their income and receive a monthly benefit towards their utility bill.

This is good news, because CUB fought for PIPP’s creation in state legislation signed in 2009.  The program helps fixed-income households manage their utility bills and prevent expensive and dangerous disconnection and reconnection cycles, while encouraging participants to pay their bills on time.

The new income limits for both programs and the PIPP credit amounts are applicable through June 30, 2021.

With many employees working from home and students learning remotely, this pandemic has highlighted how essential internet access is to our well-being and our economy. Like CUB, the General Assembly is also concerned with the feasibility and affordability of internet access across the state. The body directed the Broadband Advisory Council to study the possibility of  free or affordable broadband access to all Illinois residents.

Under Senate Bill 2135, the council is also directed to identify existing or new streams of revenue that could be used to pay for infrastructure in underserved areas of the state that currently do not have high-speed internet access. The council must issue a report on its findings, including its recommendations and a schedule of implementation, by Jan. 1, 2021.

The General Assembly plans to meet again for Veto Session the week before and the week after Thanksgiving this year.