At CUB, we get reports that customers enrolled with alternative suppliers have been charged double or triple (or worse) for their electricity—and marketers have long preyed on the neighborhoods that can least afford to pay high power bills.

That’s yet another reason we’re dedicated to making sure a new reform law, the Home Energy Affordability and Transparency (HEAT) Act is enforced.

Customers with alternative suppliers have lost about $800 million since 2015, according to the Illinois Commerce Commission (ICC). Too often we’ve seen alternative suppliers use deceptive marketing to lure customers into bad deals. Before the HEAT Act, a common scheme was to promise a cheaper fixed rate, then automatically renew the contract to a high variable rate without notifying the customer. 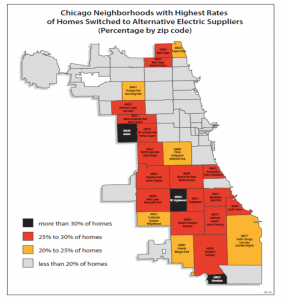 This map from Office of the Illinois General shows how alternative electricity suppliers have preyed on poor Chicago neighborhoods.

And guess which families get hit the hardest by such tactics? In a presentation to the Illinois Commerce Commerce (ICC) in 2019, the state Attorney General’s office displayed the map on the right, which illustrated how Chicago neighborhoods with a poverty rate of 20 percent or more also had 20 percent or more of their homes signed up with an alternative supplier. Compare that to a wealthier neighborhood, such as River North, where only about 7 percent of the homes were signed up.

The families who pay for these bad deals aren’t the only ones abused. A few years back, Crain’s Chicago Business did an expose showing how door-to-door salespeople, many of whom are also low-income, were lured into selling these bad deals with the promise of a higher income and housing. Instead, they had to work 12-hour days knocking on strangers’ doors and had their lodging expenses taken from their sales commissions.

Rip-offs from alternative electric and gas suppliers are why Attorney General Kwame Raoul, CUB and other consumer advocates worked to pass the HEAT Act, one of the nation’s toughest laws against such bad deals. The HEAT Act was passed unanimously by the Illinois General Assembly and it took effect on Jan. 1, 2020.

The new law features a long list of consumer protections, such as prohibiting alternative suppliers from automatically renewing a contract from a fixed rate to a variable rate, and then jacking up the price. Most importantly for low-income consumers, the HEAT Act makes it extremely difficult for suppliers to slap high rates on households getting energy-payment assistance through the Low Income Home Energy Assistance Program (LIHEAP) or a utility-run assistance program.

Under the new law, if an alternative supplier tries to enroll a LIHEAP customer, the account will be flagged during the switching process and the switch won’t be completed.

There are two exceptions:

Bryan McDaniel, CUB’s director of governmental affairs, described a LIHEAP recipient he met at a CUB utility bill clinic a few years ago who was paying nearly double with an alternative supplier. “Far too often, we see a bad deal from an alternative supplier gobbling up precious LIHEAP dollars that already can’t cover all the people who need help paying their bills,” Bryan wrote in a blog post in 2017.

By protecting low-income customers, the HEAT Act will help protect LIHEAP funds from supplier overcharges, ensuring that the money available can help as many people as possible. If you suspect that you or someone you know is getting ripped off, call the company first to see about getting out of the plan and/or receiving a refund. If you don’t like how you’re treated, file a complaint with CUB online, or call us at 1-800-669-5556.

Your ticket for the: Energy rip-offs have hit low-income communities hard, but here’s another reason the HEAT Act gives us hope