2021 Year in Review: Fighting for historic legislation, beating back millions in higher rates 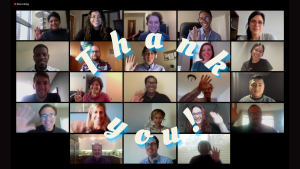 CUB’s 2021 staff thanks Illinois consumers for their support.

Amid an ongoing pandemic and skyrocketing energy prices, CUB in 2021 sued a scandal-plagued utility, beat back millions of dollars in rate hikes and helped pass historic energy legislation.

“I am proud of how our staff battled through yet another difficult year, but consumers deserve the credit,” CUB Executive David Kolata said. “We all pay utility bills and know how important it is to have clean, affordable energy—and that’s why we’re so grateful for the support of Illinois residents who believe in consumer advocacy.”

The year isn’t over, but so far CUB has:

Here’s a month-by-month rundown of the year:

February: Deep freeze
Gov. J.B. Pritzker declared a state of emergency in all 102 Illinois counties because of snow and cold. Across the Southern U.S., record cold froze wellheads and pipelines, constraining natural gas supply just as demand soared. Back at CUB, we feared this would lead to skyrocketing gas costs in Illinois. Also, CUB filed testimony arguing North Shore Gas’ proposed $10.6 million increase was unjust and unreasonable and should be slashed.

March: Costs of privatization exposed
On World Water Day, CUB called for legislation that would require a local referendum before private water companies could buy a municipal water system. Under state law, Illinois American Water and Aqua Illinois can raise customers’ rates to pay for municipal purchases—$250 million and counting. CUB’s news conference got wide coverage (Chicago Tribune: “Utility watchdog urges legislation to give Illinois residents a say in water privatization”), and a special website to educate consumers on this issue, CUBWaterTracker.com, won an award for excellence.

April: Formula foolishness
ComEd filed for a $51 million rate hike, and Ameren for $64 million—the Illinois Commerce Commission (ICC) will rule on the cases in December. Over the past decade, the utilities have raked in hundreds of millions of dollars thanks to a system of setting rates by formula that reduces regulatory oversight. Formula rates are at the center of the ComEd scandal–the utility is accused of illegal lobbying to pass state legislation that created formula rates. The summer would be dominated by efforts to pass reform legislation in Springfield.

May: Strike 1 in Springfield
After three years of hard work, CUB, as a member of the Illinois Clean Jobs Coalition, aimed to help pass pro-consumer clean energy legislation before the end of May. The stage was set to pass a compromise clean energy bill with strong provisions, like getting Illinois to 100 percent clean energy,  replacing formula rates, expanding energy efficiency and creating an ethics monitor to hold utilities like ComEd accountable. But talks among labor leaders, fossil fuel companies and utilities stalled in the last minute.  At 11:11 p.m. May 31, the coalition emailed its members: “No bill tonight, no update – get some rest.”

June: Strike 2
A new hope blossomed as legislative leaders planned to pass a clean energy bill in mid-June. But again there was no vote, because of a handful of issues, including a schedule on how and when to close dirty, expensive power plants. CUB, believing that failure to pass a bill would be bad for consumers’ power bills, worried that all its hard work would be for nothing. Also, CUB released a new guide giving people tips on shopping in the phone market.

July: Supplier rip-offs
As Springfield drama continued, CUB helped negotiate a settlement in which alternative electric supplier Great American Power agreed to pay $325,000 (in refunds, energy assistance) for allegedly failing to comply with state regulations. Also, an ICC report showed that Illinois customers of power suppliers had collectively paid $431 million more in the last year than they would have with a utility.

August: Strike 3?
While CUB hosted a series of summer events focused on cutting utility bills, Springfield energy talks were at an impasse. The Clean Jobs Coalition said it couldn’t agree to a bill that favored “large, multi-billion dollar fossil fuel interests.” After an Aug. 31 Senate hearing, CUB emailed its staff: “It appears things have slowed or ground to a halt.” It seemed like strike 3, but something happened after midnight….

September: CEJA victory!
In the early morning hours of Sept. 1, with key issues still up in the air, the Senate passed an energy bill and sent it to the House for further negotiation. The Clean Jobs Coalition pushed for a timeline for reducing emissions at expensive coal-fired power plants and closing them by 2045. “We will get this over the finish line,” one negotiator promised. After days of talks, all parties agreed to that timeline. Within a week, the House passed the newly named Climate & Equitable Jobs Act (CEJA), 83-33; the Senate passed it 37-17-3; and Gov. Pritzker signed it into law. CEJA puts the state “on a path to achieve an affordable clean energy future and hold utilities more accountable,” CUB said.

Amid that good news, we got some not-so-good news: North Shore Gas got a $4 million rate hike, about $6 million lower than it’s original request, and a federal judge dismissed CUB’s lawsuit against ComEd. Undeterred, CUB vowed to fight for a refund in state court and before the ICC.

October: Painful price spikes
Since the February deep freeze, utilities were charging gas prices double (or worse) what they were last year. Also, ComEd and Ameren power supply rates increased by 10 percent and 19 percent, respectively. Concerned about a painful winter, CUB launched CUBHelpCenter.com, a resource in English and Spanish that explains why bills are going up, and offers tips on efficiency, safety, energy assistance and preventing disconnection.

Also: CUB printed its first-ever guide for renters. Get “A Renter’s Utility Guide: Go Green, Cut Costs and Learn Your Rights” at CitizensUtilityBoard.org. (Order the guide in Spanish here.) And CUB released a study showing that Chicago residents each could slash their energy costs by up to $47,000 over the next three decades by replacing gas furnaces with a highly efficient electric alternative: heat pumps.

November/December: Still fighting for you

At the writing of this article, the ICC granted a $240 million rate hike to Nicor Gas–the largest gas hike in Illinois history. We helped reduce it by $50 million, but this is still terrible news in the middle of a winter of skyrocketing prices. Plus, the commission granted two more rate hikes: $45.8 million for ComEd and $57.6 million for Ameren. So there’s a lot more work to do. CUB looks forward to working with you in 2022, to fight the good fight for consumers.

Your ticket for the: 2021 Year in Review: Fighting for historic legislation, beating back millions in higher rates

2021 Year in Review: Fighting for historic legislation, beating back millions in higher rates