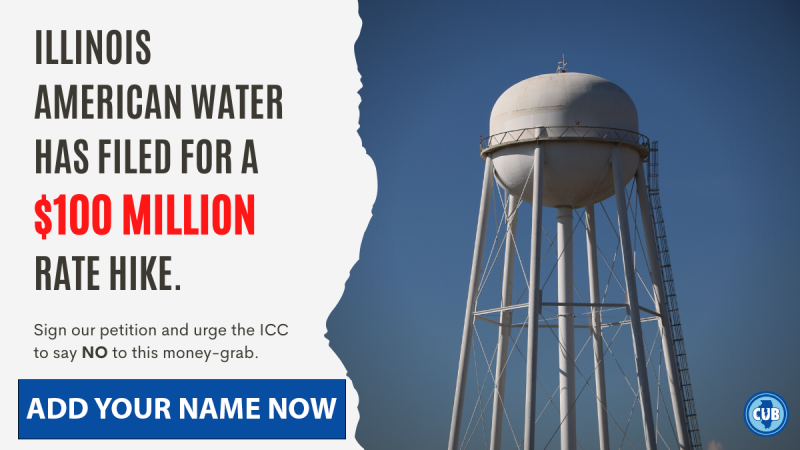 CUB argues that Illinois’ biggest private water company is pushing for an exorbitant profit rate for its shareholders, and its $100 million rate-hike request should be reduced by nearly 20 percent.

“Many customers are paying their highest gas and electric bills ever, so the last thing they need is to get hit with a punishing water increase that gives Illinois American an extravagant  profit rate,” said CUB Executive Director David Kolata. “We’ll work with fellow consumer advocates and do everything we can to cut this excessive, unnecessary rate hike as much as possible.”

In February, Illinois American Water filed for an $87.4 million increase in rates before the Illinois Commerce Commission (ICC). Now, new testimony filed by Illinois American has updated certain forecasted costs, and the rate hike has increased to about $100 million. The company wants an excessive 10.25 percent return on equity (ROE), or profit rate for shareholders.

Illinois American’s rates also include a Qualifying Infrastructure Plant (“QIP”) surcharge, a controversial, legislatively approved fee that is also used by natural gas utilities and has sparked anger among consumers paying the highest heating bills in more than a decade.

The QIP charge on water and gas bills helps cover certain costs associated with infrastructure work. But consumer advocates have tried to get it taken off bills in favor of more traditional  regulatory oversight, arguing that utilities abuse the fee and rely on it to raise bills without first getting ICC approval. Under Illinois American’s rate-hike plan, $18.3 million of charges currently being recovered in the QIP and Variable Income Tax  (“VIT”) surcharges will be shifted to base rates.

In his testimony, one of Walters’ major recommendation was to lower Illinois American’s proposed ROE to 9.35 percent, saving consumers $11 million. He also recommended regulators disallow $4.2 million in costs connected to incentive compensation. That’s because those costs were improperly tied to corporate profits, when such compensation is supposed to be tied to employee performance that benefits ratepayers.

This rate case is the latest of several battles CUB has had with Illinois American, whose parent company, American Water, earned $1.26 billion in profits in 2021. For years, the watchdog has been working to pass state legislation that would require communities to first hold a local referendum before Illinois American and another private company, Aqua Illinois, can buy up municipal systems and raise rates for customers.

Under a state law the company supported, Illinois American can actually charge customers higher rates to cover 100 percent of the cost of its municipal acquisitions–and, thus, spare shareholders that burden. Illinois and Aqua customers have now paid more than $250 million in higher rates to cover dozens of those purchases. Learn more about water privatization at CUB’s special website CUBWaterTracker.com.

The massive size of Illinois American’s proposed rate hike is tied to the company’s municipal system shopping spree in recent years. In fact, in the current rate case, Illinois American is trying to downplay the price tag of its wastewater purchases by shifting $11.8 million of those excess costs onto water customers. (There are more water customers to absorb such costs.) But CUB argues that allowing this would enable even more excessive system acquisition costs and unfairly saddle water customers with expenses from unrelated wastewater services.

An  ICC evidentiary hearing in the case is scheduled for Aug. 10.

Your ticket for the: Advocates push for cutting $18.8 million off Illinois American Water rate-hike request