“This is a major victory for Illinois consumers, who have been ripped off by alternative energy suppliers far too many times,” said CUB General Counsel Julie Soderna, whose litigation team filed briefs in the case. “And this is an encouraging sign from the ICC. It’s a new day in Illinois: Misleading and abusive salesmanship won’t be tolerated.”

(Major Update from May 2022: LifeEnergy appealed the ICC ruling, but lost at the Appeals Court. The supplier then tried to take the case to the Illinois Supreme Court, but in May 2022 CUB General Counsel Julie L. Soderna announced to CUB’s staff that the Supreme Court declined to take up the appeal, sealing the consumer victory!) 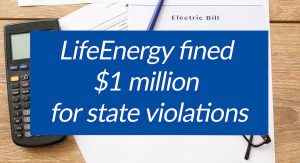 In September of 2018 the ICC launched an investigation (Docket No. 18-1540) into whether LifeEnergy, LLC, violated recent amendments to Illinois Administrative Code 412 (“Part 412”). Alternative suppliers must comply with Part 412, which CUB, the ICC and other consumer advocates have worked to strengthen in recent years. The investigation was launched after the regulatory agency’s Consumer Services Division received complaints about the LifeEnergy.

Although LifeEnergy had forfeited its certificate to operate as an alternative retail electric supplier in Illinois and agreed to refund affected customers, CUB argued that exiting the market did not excuse the company’s clear violations of Part 412. In the final order, the ICC listed these violations:

“LifeEnergy not only harmed Illinois consumers by using methods contrary to Illinois rules and regulations, but also harmed the Illinois retail market,” ICC Chairman Carrie Zalewski said. “This is not what competition is supposed to be about.”

Many consumers do want to have a choice of electricity suppliers, but competition has not worked well for consumers in recent years. CUB has warned that it’s likely you will lose money with an alternative supplier. In fact, customers have lost more than $870 million to alternative electric suppliers since 2015, according to the Illinois Attorney General’s Office.

Under the final order, the company must pay the penalty of $1 million and issue a total of $34,178 in refunds to all customers enrolled with LifeEnergy between May 1, 2018 and July 2, 2018 within 45 days of the order taking effect.  (The refund amount is an estimate of the difference between what the company’s customers paid for electricity vs. what they would have paid if they had stayed with ComEd as their supplier.) LifeEnergy must file proof of the distribution of refunds with the ICC within 30 days of issuing the refunds.

Cases like this are why CUB fought for stronger consumer protections in Part 412 and why it fought for passage of the HEAT Act. When you suspect misleading marketing from alternative suppliers, call the company first to see about getting out of the plan and/or receiving a refund. If you don’t like how you’re treated, call CUB to file a complaint, at 1-800-669-5556.

Your ticket for the: ICC orders $1 million fine against alternative energy supplier