Heading into what could be the most expensive heating season Illinois consumers have seen in more than a decade, many utility customers across the state are already behind on their utility bills. 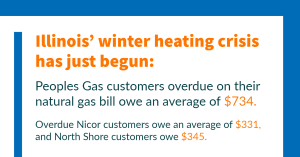 Customers of Nicor Gas, which serves most of northern Illinois outside of Chicago, owe $63.7 million. Almost 200,000 customers are more than 30 days late on payment and owe an average of $331.

Note: There was a delay in Ameren posting its numbers, but CUB will report them as soon as we get more information.

Many consumers were already struggling to pay their utility bills due to the economic effects of the pandemic. Last January, more than 176,000 Chicago households were more than 30 days late on their heating bills and owed a collective $124 million, according to Crain’s Chicago Business. With natural gas prices on the rise and the heating season upon us, Chicagoans who can’t afford their heating bills are slipping even deeper into a financial crisis. That could spell disaster for some families in the future.

The price of natural gas, the heating source for most Illinois consumers, has skyrocketed over the last seven months. Natural gas utilities are charging up to three times more than their 2020 prices, with some charging more than a dollar per therm. CUB expects supply rates to be the most expensive Illinois consumers have seen since the 2008-2009 heating season.

These high gas prices are connected to an extreme cold snap that brought record-low temperatures across the nation last February. The cold froze natural gas pipelines and wellheads in the South, limiting supply across the country as heating demand increased. This led to skyrocketing prices. There are other contributing factors to the prices, such as decreased gas exploration and well construction and problems caused by Hurricane Ida.

While gas commodity prices are a big reason for higher bills, it’s not the only reason. Peoples Gas bills were already rapidly rising, due to a pipe-replacement program accused of overspending and mismanagement. Gas companies have also won rate hikes, and Nicor is pushing for a $198.8 million increase this winter.

CUB encourages consumers to be prudent with their gas usage and practice energy efficiency when possible to help protect their bills. Visit the CUB Help Center for more information about winter heating safety and reducing your heating costs.

If you’re having a hard time paying your bill or you received a disconnection notice, call the company immediately to discuss your options. If you cannot afford your bills, you could be eligible for financial assistance. You may need to enter into a deferred payment arrangement, and in certain circumstances, you may be able to use a medical certificate to postpone disconnection. Do everything you can to prevent disconnection. If you are shut off, you lose all of the rights and protections that exist for active customers.

Your ticket for the: Affordability crisis: Illinois consumers grapple with overdue utility bills as winter weather draws near