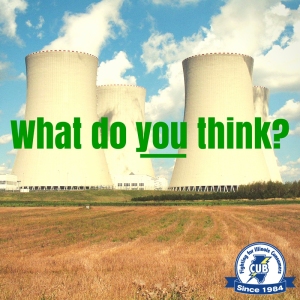 Nearly 1,900 people responded to our informal survey about a push by Illinois’ biggest energy company, ComEd-parent Exelon, to raise electric bills by up to $1.6 billion–and eight out of 10 said NO to the idea.

Here’s how you answered our unscientific poll: Should Illinois give unprofitable nuclear plants more money if it helps fight climate change?

This is the biggest energy question facing the Illinois General Assembly in 2016, and CUB’s spending long hours in Springfield fighting to defend your bottom line.

Haven’t weighed in? Please take CUB’s poll today, and help CUB fight for you in Springfield!

Your ticket for the: Results of quick poll on Exelon Bill