Natural gas prices charged by Illinois utilities began shooting up last spring, and continue to be at a high level (double and triple last year’s prices) as we head into the expensive winter heating season. Read our Q&A to find out why this is happening and how you can protect yourself.

What are the major gas utilities charging in Illinois?

Prices charged by Illinois utilities have been double or triple what they were last year. Crain’s Chicago Business reported in late September that prices could be at their highest levels since the winter of 2008-09, and gas utilities in the Chicago region predict that heating bills from November through March will be about 35 percent to 50 percent higher than last year.

CUB has been following the gas prices each month. For the latest charges, see CUBHelpCenter.com. This chart on Nicor Gas’ website is a good illustration of when the price spike began in 2021. 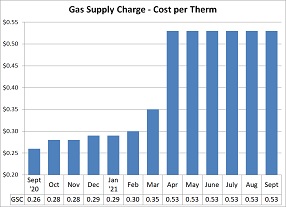 Why are we seeing an increase in prices?

In part, it’s the lingering effects of an extreme cold snap that brought record-low temperatures across the nation last February. The extreme weather, which has been attributed to climate change, froze natural gas pipelines and wellheads in Texas and other areas of the South, limiting supply across the country just as heating demand was shooting up. The limited supply coupled with high demand sparked skyrocketing market prices that contributed to high utility supply rates all year.

Gov. J.B. Pritzker’s administration issued a disaster proclamation for all 102 Illinois counties in the wake of the snow and subzero temperatures in the state February 14-15.  Pritzker said: “Extreme weather has resulted in frozen wells in key natural gas producing states, including Texas, Oklahoma and Kansas. The sub-zero temperatures are resulting in increased demand and decreased supply, causing natural gas prices to spike. Utility companies across the nation are reporting soaring wholesale costs…”

Other factors have helped keep prices elevated, including: 1) increased demand as economies worldwide begin to recover from the pandemic; 2) increased Liquid Natural Gas (LNG) exports to other parts of the world, such as Europe, keeping supply lower here;  3) less gas exploration and well construction in recent years; 4) increased use of gas for electricity generation in a hot summer of high air-conditioning use; and 5) Hurricane Ida knocked more than 90 percent of gas production in the Gulf of Mexico offline in late August, according to the Energy Information Administration. (For more on the high gas prices, see coverage by Bloomberg and NPR.)

How are gas prices regulated in Illinois?

Natural gas utilities do NOT profit off gas supply. Under state law, they pass on the costs of natural gas to consumers, with no markup. (The companies do make a profit off the rates they charge us to deliver gas to our homes. When utilities ask for delivery rate hikes, CUB challenges them.)

But supply prices are monitored differently than delivery prices. Each year, state regulators in Illinois and consumer advocates like CUB review the gas-management procedures of each utility. Although it’s rare, the Illinois Commerce Commission (ICC) can order refunds if, after the fact, commissioners determine companies have not been careful with the way they managed gas supply. (The utilities are obligated to practice hedging, which means using a combination of long-term contracts, gas from the utilities’ own storage fields and wise purchases on the spot market to secure the lowest prices possible. Avoiding heavy spot market purchasing is key when prices are elevated.)

Other than high supply prices, is there any other factor driving up gas bills?

Yes! For years, CUB and other consumer advocates have been on a campaign to rein in out-of-control infrastructure spending by gas utilities across the state that has led to rapidly rising heating bills. In fact,  CUB has repeatedly warned of a worsening heating-affordability crisis in Chicago.

The utilities successfully pushed for legislation in 2013 that allowed them to add a surcharge to bills that helps them bring in revenue more quickly and easily than through a traditional 11-month rate case. With Peoples Gas, the utility for Chicagoans, the surcharge is about $13 every month for the average household. That’s more than 10% of their yearly bill, Crain’s Chicago Business reported.

“So many people in the city are having trouble paying their bills as it is,” CUB Executive Director David Kolata told Crain’s.  “This is a reckoning that was just waiting to happen. The infrastructure investments that were so out of control have been somewhat hidden.”

In September 2020, roughly 30 percent of Peoples’ customers received disconnection warnings–nearly 1 in 3 customers in Chicago couldn’t afford to pay their monthly gas bill, Kolata warned, as he advocated for exploring new and better ways to heat homes than through fossil fuels.

In addition to adding the surcharge to gas bills, utilities also are pushing for rate hikes. North Shore Gas just received an increase of about $4 million, and we’re challenging Nicor’s request, which began as a $293 million hike and has been adjusted to about $198.8 million–still too high.

What are alternative suppliers charging?

So with the current situation in the gas market, be careful of elevated alternative supplier variable rates–prices that change on a monthly basis. Also, companies charging a fixed rate, which would presumably protect a customer from a spike in natural gas prices, could claim “force majeure.” That’s a legal term to describe a company claiming it can no longer honor a contract because of unforeseeable circumstances beyond their control.

CUB will continue to monitor the market. But everyone who lives in Nicor Gas territory or North Shore/Peoples Gas territory should pick up their bills to see if they are overpaying with an alternative supplier. If you do have a supplier and you’re overpaying, call the company and ask to cancel the offer and go back to the utility. (If you don’t like the experience you have with the supplier, file an online complaint with CUB.)

Are the high prices caused by manipulation in the energy markets?

We don’t know. It is well-documented that the subzero weather that hit the nation last February caused problems at the well-head and at natural gas facilities along the supply chain in the South. But whenever there is a spike in prices, for whatever reason, consumer advocates and regulators investigate whether any energy companies took advantage of the situation to profit. The Federal Energy Regulatory Commission (FERC) did release initial findings of a review this month, and in part recommended that power plants and the natural gas network be better equipped to handle extreme cold.

What can consumers do?

Your ticket for the: Q&A: High natural gas prices in Illinois