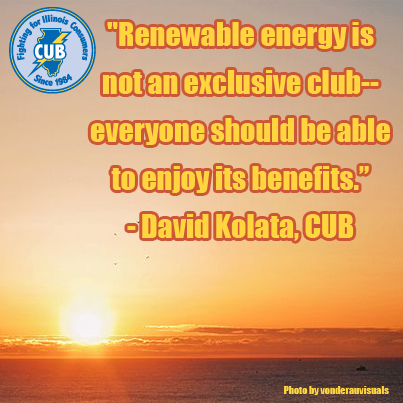 Power to the people, right on. -John Lennon

Mr. Lennon would have appreciated the “community solar” proposal that CUB and the Environmental Defense Fund (EDF) have made before the Illinois Commerce Commission (ICC).

The proposal would smash barriers that have kept families from enjoying the benefits of renewable energy. Imagine entire neighborhoods getting a break on their power bills–even families who don’t have solar panels.

“Renewable energy is not an exclusive club—everyone should be able to enjoy its benefits,” CUB Executive Director David Kolata said. “Our Community Solar proposal, in effect, is renewable energy for the masses, and that’s vital to making our electric bills lower and our power grid more stable.”

Currently, Illinois homeowners with rooftop solar panels can receive compensation credits on their electric bills by sending excess renewable energy back to the power grid—a benefit called “net metering.” However, only about 300 northern Illinois customers participate because many people, particularly renters, lack the funding and space to install solar.

We hope to change all that with our “community solar” plan. Here’s how it would work:

A “host customer”—a home, business, school, for example—would recruit neighbors to invest money in a solar energy project of up to 2,000 kilowatts. The neighbors who invest would then share in electric bill credits generated when the solar panels produce power and give it back to the grid. The financial benefit the investors gain would be based on the level of their financial contribution.

As CUB told the Chicago Tribune, you could conceivably have dozens of neighbors share in kilowatt-hour savings worth hundreds, even thousands of dollars.

Although community solar would be an Illinois first, similar programs have been used successfully in California, Massachusetts, Connecticut, Maine, New Hampshire, Colorado and Vermont. In California, for example, the program has brought the benefits of renewable energy to more than 6,300 affordable housing units.

EDF and CUB want to start out with a three-year pilot project in ComEd territory in 2016, basically to work out the kinks. But we hope the program would be expanded to all ComEd and Ameren customers by 2020.

Your ticket for the: CUB/EDF propose an IL first: Community Solar